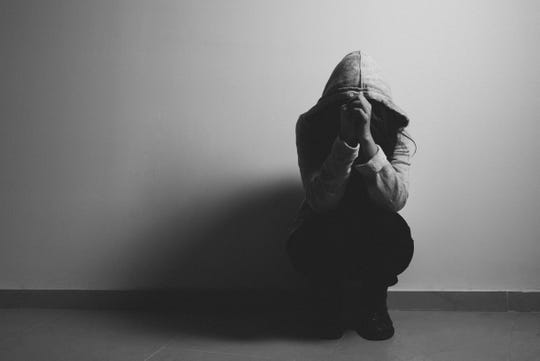 My family dynamic has always been very awkward, my parents always argued when I was around and when I was 16 my Dad very nearly left with a packed bag until I begged him to stay. Thinking back on it, it would've been better for him if I'd let him leave. I was very used to a strained family dynamic, it's all I'd known for my entire life.

I was around 17 ish when my Mum told me that she wanted to divorce my Dad and told me not to mention it to him. She told me she'd speak to him after I'd finished my college tuition.

I started college and made a tight-knit group of friends that I trusted with everything I had going on; including a mentally abusive relationship with my boyfriend at the time. I should've listened to my best friend from school who dated this guy before, she told me he did something horrific to her and I didn't believe it (I regret that every day).

He was the type of boyfriend that was disturbingly clingy, to the point that I wouldn't want to get out of bed at all in fear that I'd have to go and see him. Eventually, he introduced me to one of his friends. He was kind, funny and would always listen when I had trouble with my boyfriend. We started developing feelings for each other and when my boyfriend found out he became increasingly verbally aggressive towards me.

One day, during college, he called me to tell me that he was going to tell my Dad about my Mum planning to divorce him. He did. It destroyed my family and tore us to pieces.

After that, my parents and I stayed in the same house for a long time while I finished my college course, my dad would rarely come downstairs because my Mum would be watching T.V. They slept in separate bedrooms and we never ate together. Then again, I'm not sure what I was expecting. It was horrible, but it was even worse when we started packing our things to move out. All the photo albums and mementos from holidays we'd been on before were too much to look at.

I still feel resentment towards my Mum sometimes, for not doing it earlier. I know she'd do it differently if she had the chance to rewind, but what's done is done.

It's been 5 months since we moved out of our family home and into separate houses. I miss having a family, but there's not much I can do about it. I see my Dad at least once every week since he's usually busy with work and I live with my Mum.

I'm not sure if I have anything wrong with me mentally and I'm too terrified to go to the doctors and be told 'Nah you're just an idiot there's nothing wrong with you'. I'm terrified of the outdoors, I don't have a job and I sit in my room drawing all day. I can't sit in silence otherwise my tinnitus acts up or I start having horrible thoughts.

I'm still trying to heal at the moment I suppose.

But for anyone going through their parents divorcing: